Garachico was once one of the wealthiest towns in Tenerife. It was famously engulfed in lava by an eruption in 1706. Today it is one of Tenerife’s most popular day-trip destinations. The spectacular oceanfront rock pools which were formed from the lava flow are popular for swimming with tourists and locals. Our Garachico hotels are boutique style properties.

The rock pools are popular for swimming and snorkelling and have sunbathing areas. In contrast the dark sand shingle beach in Garachico is quite small.

Tapas Bars and fish restaurants can be found along the waterfront. In addition there are a number of shops offering local handicrafts.

Garachico is one of Tenerife’s prettiest towns. Tourists are drawn to its cobbled streets, beautiful churches and lovely parks.

There is an outdoor swimming pool with sun terrace overlooking the sea, in addition to a tennis court and a multi-sports court.

The pretty town of Icod de los Vinos is close and is famous for its thousand year old drago tree. Masca in the Teno Mountains is just a short drive from Garachico and is one of the most picturesque parts of Tenerife. Spectacular rock formations, deep ravines and lush vegetation surround the narrow winding roads that lead to the village. 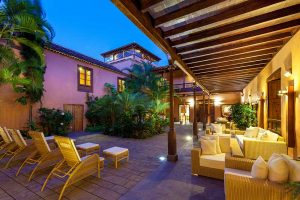 Hotel La Quinta Roja is the historic home of the Marquis of Quinta Roja. This beautifully restored... 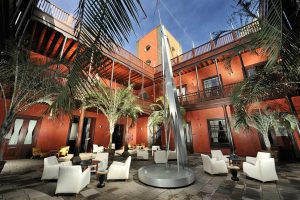