Los Gigantes is a popular oceanfront resort. It has spectacular cliffs, a pretty harbour, two Lido style outdoor pools and a streets bordered by trees and flowers. Regular dolphin and whale watching trips operate from the harbour. We have a small selection of private villas and apartments in Los Gigantes.

The majority of the coastline here is rocky. Los Guios beach has black volcanic sands, clear waters plus sun loungers and parasols for hire. Water sports are popular here including jet skiing, water skiing and paragliding

Two lido style swimming pools provide an alternative to the sandy beaches. Both of these pools have bars, wide sun terraces for sunbathing and open views of the ocean

A wide range of bars, restaurants, shops and supermarkets can be found throughout the resort.

The harbour is lined with pavement cafes and restaurants, a beautiful spot for a fresh fish supper. There are dining options to suit everyone and a range of bars from wine bars and live music venues to sports bars and karaoke bars.

Los Gigantes offers cruises that let you explore the volcanic caves hidden under the massive cliff formations. There are also very popular dolphin and whale watching excursions which run from the Marina.

A popular trip is to the mountain village of Masca which has a spectacular walk down the valley to Masca Beach. This is one of the most picturesque parts of Tenerife and the walk takes around 3 hour. From the beach you can get a boat or water taxi back to Los Gigantes.

Less than an hour from Los Gigantes is the spectacular Teide National Park where a cable car runs to the top of Teide Volcano, Spain’s highest peak. This takes you over a landscape of craters, volcanoes and lava rivers.

A coastal path along the rocky coastline leads to the neighbouring village of Puerto Santiago. Along the way you can explore the rock pools of Crab Island and visit a traditional Canarian restaurant

At the next resort along, Playa de La Arena (3km from Los Gigantes) there is a blue flag sandy beach in a sheltered bay which has beautiful clear waters and pristine black sand. 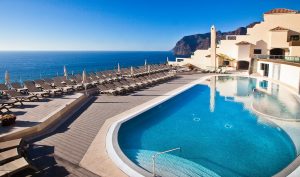 The Royal Sun Resort has a cliffside location offering spectacular views over the ocean and Los Gigantes. The... 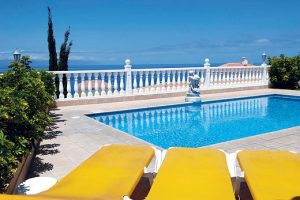 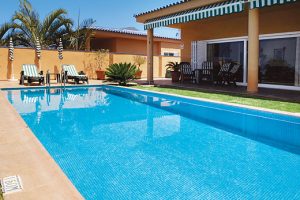