An attractive harbour and a quaint old town gives Puerto de la Cruz a traditional Spanish feel. The architecture here has changed very little over the years however there are still a number of high end restaurants and bars to be discovered. You have a choice of two architect designed beaches. As you head out of town you will pass through vast tropical fruit plantations.

There are two pretty beaches, Playa Martianez and Playa de Jardin. Each has a wide stretch of black sand with sun loungers and beach kiosks. Close to the beach there are tropical gardens with waterfalls and a choice of bars and restaurants. For golden sand head to Playa de las Teresitas which is 3 miles north of Santa Cruz de Tenerife.

The area around the fishing port is full of narrow streets with colonial-style cafés and bars. Down by the harbour little stalls serve traditional Canarian dishes including fresh seafood overlooking the ocean.

Loro Parque is a world-famous animal park with over 30,000 animals. It has a Jurassic Park feel with dense tropical palm groves. The popular shows feature dolphins, killer whales and sea lions. For close-up animal encounters wander past the incredible habitats. These were created to replicate the animals natural environment and include a massive ‘Gorilla’s Jungle’.

Botanico Gardens at La Paz is 10 minutes out of town and has over 5,000 exotic trees and plants.

Teide National Park is not to be missed. A cable car runs to the top of Teide Volcano which is Spain’s highest peak.  (3,718 metres above sea level) Visitors pass directly over the craters, volcanoes and lava rivers.

The village of Masca has changed very little over the centuries. Sitting on a rocky plateau in the Teno Mountains in northwest of the island, Masca is one of the most picturesque parts of Tenerife. Spectacular rock formations, deep ravines and lush vegetation surround the narrow winding roads that lead to the village.

Garachico was once one of the wealthiest towns in Tenerife. It was engulfed in lava by an eruption in 1706 and today is a popular day-trip destinations. The lava flows created spectacular rock pools which are great for swimming and snorkelling. 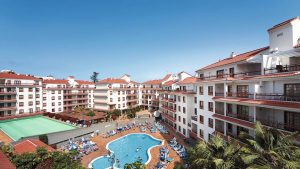 The Casablanca Apartments are a short walk from Puerto de la Cruz Beach and the Lago Martianez seawater...