The quiet fishing village of Puerto de Santiago has a good choice of international and local restaurants behind the beach. The local beach resorts of Los Gigantes and Playa de la Arena can both be reached along the rocky coastal path.

There is a small black volcanic sand beach at the bottom of a steep hill. It is a blue flag award beach and has plenty of sun loungers and umbrellas plus a couple of restaurants. The lovely beaches at Playa de la Arena and Los Gigantes are just a 10 minute stroll away.  Los Gigantes also a couple of lido style swimming pools which are a popular alternatives to the sandy beaches.

Puerto de Santiago offers a choice of restaurants from local tapas bars to international cuisine. A more upbeat atmosphere including live music and sports bars can be found at Playa de la Arena a short walk away

About an hours drive from Puerto de Santiago is the spectacular Teide National Park. You can take a cable car to the top of Teide Volcano, which rises to 3,718 metres (12,198 feet) above sea level making it Spain’s highest peak. The cable car takes you over a unique landscape of craters, volcanoes and lava rivers.

There are cruises from Los Gigantes that take you to the volcanic caves hidden under the massive cliff formations. There are also popular dolphin and whale watching excursions which run from the Marina.

Within a 30 minutes drive is the village of Masca. Perched on a rocky plateau in the Teno Mountains in northwest Tenerife, the village of Masca has changed very little over the centuries. Masca is one of the most picturesque parts of Tenerife. Spectacular rock formations, deep ravines and lush vegetation surround the narrow winding roads that lead to the village where the houses sit precariously on narrow ridges. 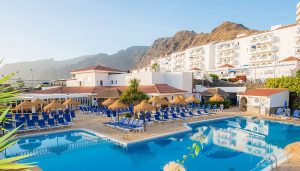 Ona el Marques is an elegant apartment resort in Puerto de Santiago. The 1 & 2 bedroom apartments are...