Santa Cruz is in north east Tenerife and is the island’s capital. It is quite a cosmopolitan city with a wide range restaurants, bars, galleries and museums.

One landmark not to miss is the auditorium on the seafront. It is home to the Tenerife Symphony Orchestra and a great example of modern architecture.

Playa de las Teresitas is one of the best beaches in Tenerife. Just 5 km north of Santa Cruz, it has a mile long curve of fine golden sand imported from the Sahara. The Anaga Mountain range overlooks the beach providing a stunning backdrop. The village of San Andres can be found at one end of the beach and has some lovely seafood restaurants.

One place not to miss would be La Noria. This vibrant district has brightly coloured old colonial houses which have been converted into mojito bars, cafes and tapas restaurants.  The colourful African Market has a great atmosphere too, An ideal place to pick up fresh fruit, meats, spices and cheeses plus craft items produced by local artisans.

Santa Cruz has a Natural History Museum and a number of historic churches. The spectacular Auditorium of the seafront is home the Tenerife Symphony Orchestra.  For a relaxing days out head to Parque Garcia Sanabria. It has tropical gardens, a fountain, play area and a number of cafes.

Not long after leaving Santa Cruz you will be in the Anaga Mountains. The views winding roads are breath taking and there are a number of traditional mountain along the route. 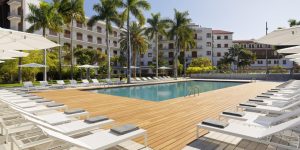 The Iberostar Heritage Grand Mencey is an elegant colonial style property. Located in walking distance of...